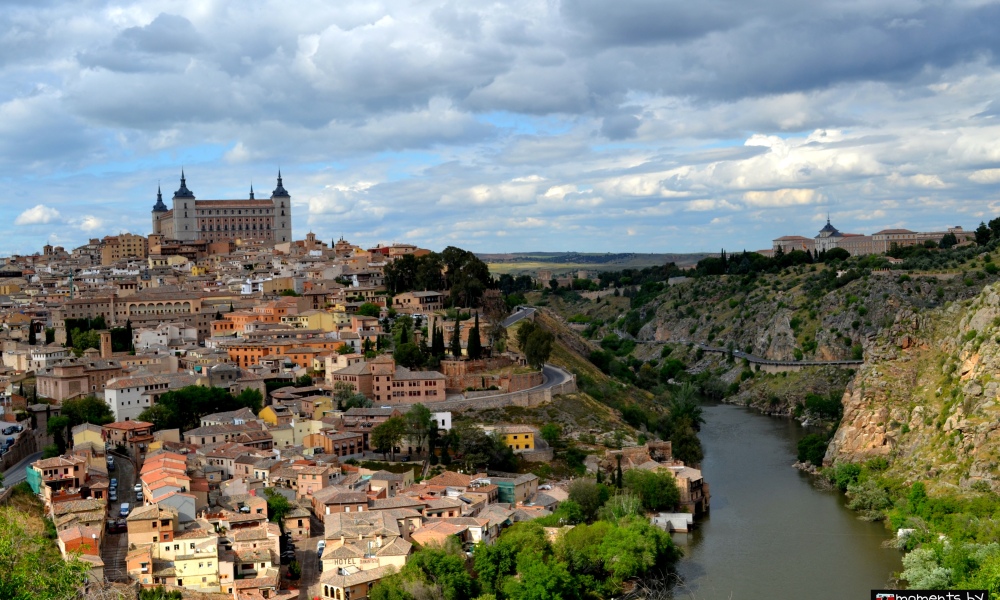 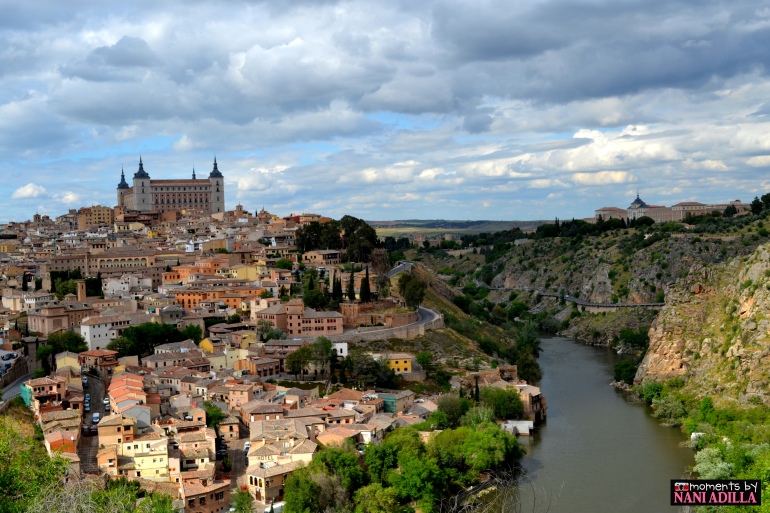 TRAVELLING AT 300km/h on the Renfe train from Madrid to Toledo… Best decision ever on our Spanish trip this past April!

It really was only a half-hour journey and I paid €20 for a return trip. Tickets were reasonably priced, so what’s there to complain about! I would recommend anyone visiting Madrid to take a day’s trip to this beautiful ancient city of Toledo – once the capital of Spain.

I was thrilled at having the chance to snap a picturesque view of the city. Far in the distance, you can see the highest point of Toledo. The Alcázar of Toledo used to be a Roman palace, having been rebuilt many times thereafter under the reigns of different emperors. Now, it is the site of the Army museum and the fortress with its towers is still very well-preserved.

Walls and bridges of the ancient city

You get a feel of the old city with its walls and bridges, some dating from as early as the 2nd century. The Peunte de San Martin is one of the “newer” bridges from the medieval times in the 16th century, built across the river Tagus. There are two gates on either sides, used to prevent invaders from attacking the city back in the past. You get a lovely view from the bridge, as well as from the road above.

View from our rooftop terrace

We stayed for 2D1N at the Oasis Hostels, just a little off the main Plaza Zocodover. Even though it was a really short stay (we reached at 1pm and departed at 11am the day after), trust me when I say that it was enough for me to fall in love with Toledo!

Toledo was known for its peaceful co-existence of the Christians, Jews and Muslims; in a time period known as the La Convivencia and during which people practiced religious tolerance. This carried on for about 700 years till the Spanish Inquisition came about in the 15th century, where many Jews and Muslims were forced to leave Spain altogether (or alternatively convert to Christianity).

At current times, visitors can still admire the remains of the old churches, synagogues and mosques. It is for this historical reason of co-existence that Toledo is considered a UNESCO World Heritage Site. 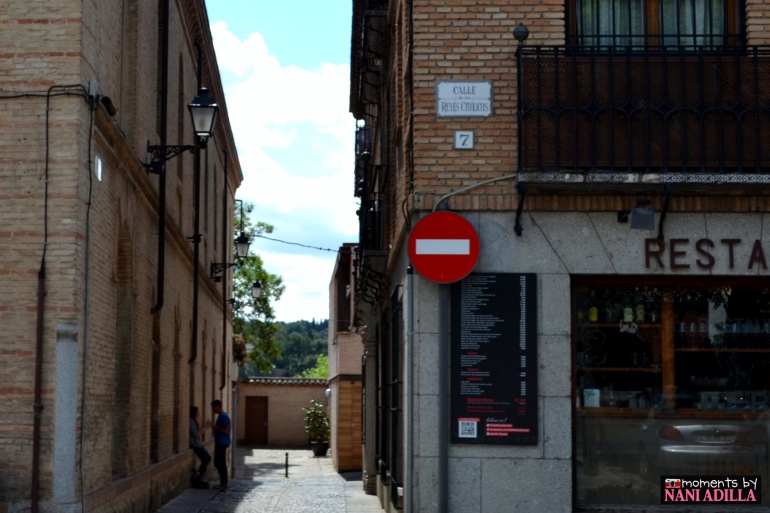 What to do in Toledo is simply to take long strolls through its streets via the cobblestone pathways. While doing that, take a look around to admire the architecture and peek into some of its shops (Toledo is famed for its traditional sword-making). I particularly liked the Jewish quarters as once in awhile, you’d catch precious moments of people’s pastimes.

The Catedral Primada Santa María de Toledo is a lovely Gothic-style cathedral. Its facade had three portals, one of which had no figurative motifs (like the usual gargoyles) but only floral decorations in limestone. I was then bent on finding a souvenir fridge magnet with that design – my purpose for the rest of the day!

By contrast, the architectural influence of the Muslim Moores could be seen on the remaining mosques. More recently, Toledo’s train station boasts the Moorish Revival architecture, with its lancet arches and abstract-shaped brick ornamentations.

If you are into history, Toledo would be a perfect place for you to absorb in it. Just be sure to have a local guide you along, or take one of the many paid tours to have a deeper understanding of the old stories. I came to Toledo from Barcelona, and then to Madrid… and in each of these Spanish cities, you would again be reminded of its history through its people and places. Kind of like bits of puzzles for you to form, having a clearer picture.

And a stronger reason to come back relishing the beauty of these great cities.

Visited April 2014, stayed in a private 4-bed dorm for €16/night
A friend recommended Oasis Hostels to me while she was staying in Granada, I decided to head on with the one in Toledo. Tucked in a little corner just slightly off the main Plaza Zocodover, what I really liked was its rooftop terrace with a pretty view. There is a kitchenette for you to cook and 2 computer terminals. We stayed in a 4-person dorm… Rooms were comfortable, and the bathroom is pretty neat with a bathtub as well. Really value-for-money!  -My TripAdvisor review (NaniSG)

NAZURAH x MUHAIMIN The best kind of weddings are when you’re friends with both bride and groom. Naz was the first friend I made in Temasek sec, and after all these years I couldnt be happier to be part of your beautiful day. Congratulations @qotwnaz @abdul_muhaimin89, you two are so good for each other! May the marriage years ahead be blissful ones filled with love, humour and understanding. @dandeman47 are looking forward to more KL trips please.
ISRA INSYIRAH Precious addition to the family and mum/dad’s first grandchild. Welcome to the world my niece... Baby Poko is looking forward to meeting her cousin come April, she’s been somersaulting all day! ❤️
2019 vs 2015 👉🏼 Traded hiking backpacks for IKEA household bags, but always the same unamused Nani next to excited Sham @sharmeee #preggobuddies #girlfriendsforlife
A gorgeous beautiful wedding with florals and fairylights, overlooking the sea. Then there is the even more gorgeous and pretty bride! Congratulations again kawan @becheerybecherie!! So very happy for you and Joel ❤️
Week 20. Took five months to get to this point and it wasn’t the easiest. I had senior colleagues and older cousins before me sharing their pregnancy stories, dos and don’ts, what to expect when you’re expecting. But oh was I not prepared for the so-called morning sickness... “anytime” sickness had nausea hitting me at random times, triggered by the randomest things. And the fatigue was legit to the point I got annoyed with myself for always needing to nap. Through it all, Danial has been my silent hero; helping with dishes after I’ve cooked, offering to buy dinner when we’re both back late, and pronto waking at 3am to massage and stretch when my lame calf cramps paid a visit. Then there’s dealing with the whiny crying version of me (not proud of this) and encouraging me everytime I doubted myself. Doubting being able to juggle health, work commitments and this soon-to-be motherhood. I’m an OT and I struggled to MOHO myself to deal with this identity crisis! Thankful still for life’s learning, even more grateful to have you as my life partner @dandeman47. Here is to the next 20 weeks! Bunch of nerves but we are thrilled awaiting what’s to come xx #danxnani
Happy 100th (day) Hannah Lee! 👧🏻🎈🎀 Thank you @hengzky, Sihui and Anton for having us at your #babyshower
Flower Sunday 🌺🌸🌼 Missing you @hazirahaw
Sundays are for gaining calories 🍰☕️
(cues song) Arabian nights... T-1 day to #SiddiqFoundAmiraCLE with a henna party and Im so proud of my latest moroccan mint tea set but thanks @hazirahaw @niiisaaaaaaaaaa for actually making the tea hahaha✨ #hennanight